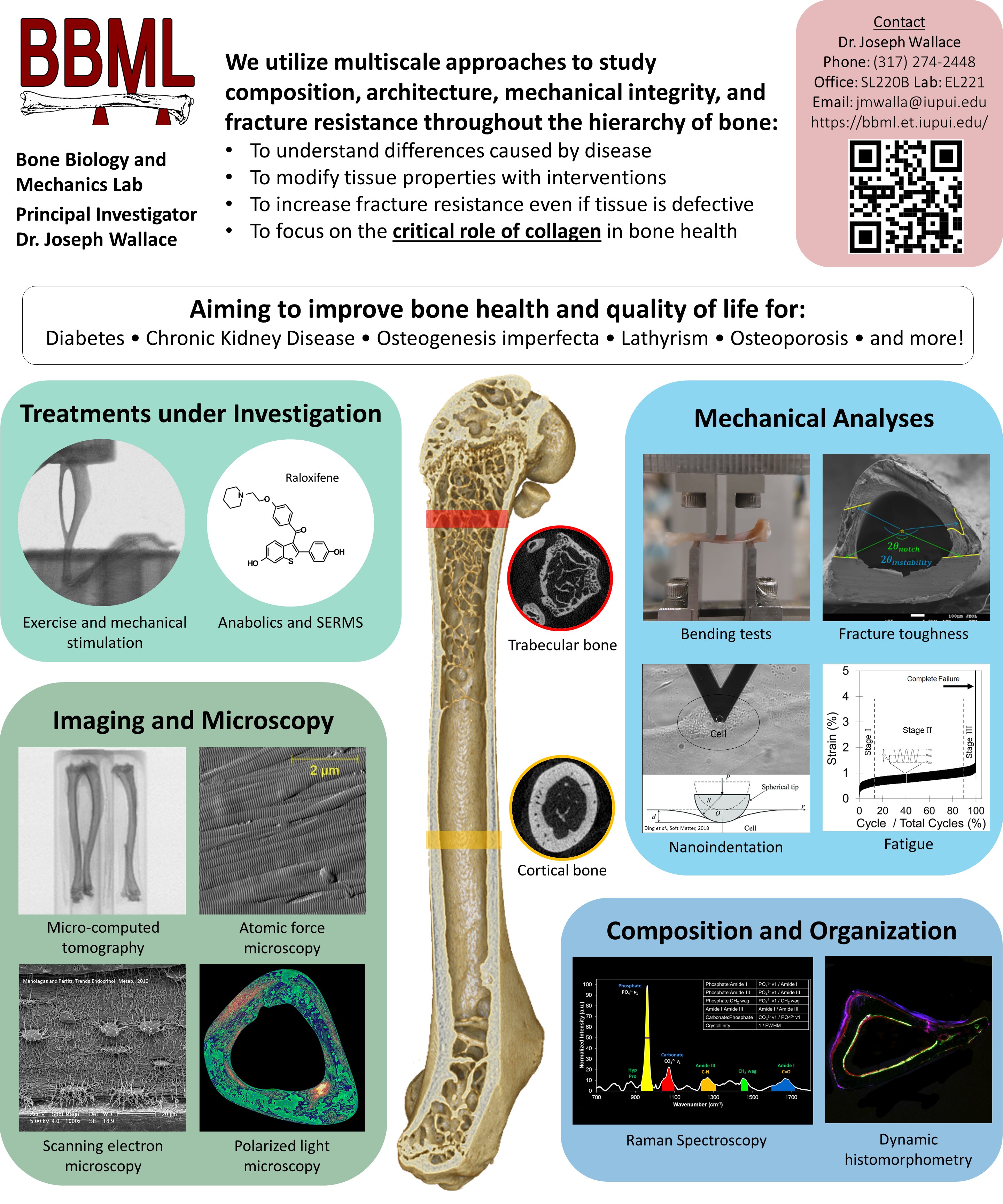 Notable Research Projects in the BBML: Click the title on each for more information

As a tissue and organ, bone serves vital structural and metabolic roles in the body. Bone is hierarchical, having structural elements that exist independently at length scales ranging over 9-10 orders of magnitude from the molecular level to the organ level. Bone is primarily a two-phase composite material composed of a flexible collagen matrix which is impregnated with and surrounded by a stiffer, stronger, reinforcing mineral. The combination of strength, stiffness and toughness that are mechanical characteristics of bone as a tissue are initially derived from the interaction between these nanoscale constituents. Bone balances strength and toughness with minimal mass while contending with the constant structural and metabolic demands of the body.

As opposed to traditional microscopes which focus light or electrons on a sample to produce an image, atomic force microscopy (AFM) works by dragging a sharpened probe over the surface and using interactions between the surface and probe to build a map of the sample's topography. In essence, AFM acts like a nanoscale phonograph or record player. AFM is relatively inexpensive and simple to perform. It is a high-resolution imaging modality which is less-destructive than either transmission electron microscopy (TEM) or scanning electron microscopy (SEM), techniques which researchers have traditionally relied upon to probe the nanoscale properties of materials such as bone. Samples imaged using AFM can remain intact and can be imaged in air or fluid, at room temperature or under culture conditions, implying that measured properties are characteristics of the sample and less likely artifacts of processing or imaging. In addition, the AFM probe can be used to extract nanoscale mechanical properties (both in terms of the forces and physical size of material that is probed) by scratching, indenting, pushing or pulling on the sample.

Over the past few years, our lab has focused on applying AFM-based imaging and mechanical probing to the assessment of tissues including bone, dentin and tendon. These studies have yielded new and exciting information about fundamental characteristics of the ultrastructure of collagen-based tissues. In addition, disease-induced changes in these tissues have been uncovered.

Disease-Induced Changes in the Extracellular Matrix of Bone

One of our key research thrusts is focused on examining mechanisms of diseases which impact bone and other collagen-based tissues through changes in collagen synthesis, structure and function. Despite the importance of a healthy skeleton to overall health and well-being, it is unclear how bone’s nanoscale constituents (collagen and mineral) produce a material that is capable of handling the structural and metabolic demands that are placed on it. There is also limited understanding of how perturbations to these constituents with disease can have severe detrimental effects on tissue quality and fracture resistance. Specific diseases of interest include the genetic disease Osteogenesis Imperfecta (OI), Chronic Kidney Disease (CKD), Type II Diabetes, lathyrism, Osteoporosis and Down Syndrome. We interrogate tissues from various mouse and rat models of these diseases using imaging and mechanical testing techniques spanning several relevant levels of tissue hierarchies. This type of in-depth analysis allows us to correlate genotype with structural changes in collagen while leading to a better understanding of structure/function relationships in Type I collagen-based tissues.

Synthesis of collagen from bone cells in vitro

To understand extracellular matrix structure and function on a cellular level, we study and characterize the collagen synthesized by bone-forming cells (osteoblasts). There is a lack in understanding of how nano/microscale structural, functional, and biochemical properties of collagen transcend levels of the bone hierarchy. We aim to begin filling this knowledge gap by characterizing the collagen produced by osteoblasts in vitro, in the context of disease or under the influence of external stimulation. Currently, our lab is focused on investigating the in vitro effects of mechanical loading, via fluid shear stress and substrate stretching, on osteoblast function and collagen properties.

Another focus of the lab is the study of how mechanical stimulation affects bone. We aim to understand how mechanical stimuli, either directly applied via the mechanical loading of specific limbs, or through exercise, play a role in formation, organization and maintenance of bone at the nanoscale and how this correlates with observations at other length scales. Our long-term goal is to determine if fracture resistance can be improved by mechanically altering collagen and mineral in bone. In combination with the diseased models discussed above, we use mechanical stimulation to prevent or treat disease-induced changes in bone quality and mechanical integrity.