As a tissue and organ, bone serves vital structural and metabolic roles in the body. Bone is a hierarchical structure, meaning that is has structural elements at one length scale which are composed of elements which, themselves, have structure at smaller length scales. This hierarchy plays a major role in determining the bulk mechanical properties of the overall bone. Hierarchy in structures is employed because hierarchical structures typically contain less material to achieve a desired strength. In addition, one can simultaneously achieve a strong and tough material, for which there is normally a trade-off. An obvious real world example of structural hierarchy is the Eiffel Tower. As a whole, the tower is composed of pig iron and stands just over 300 meters tall, with a square base of 100 meters per side. A closer look reveals that the larger structure is composed of a lattice-work at each of the four corners where diagonal girders connect elements together. These units, with dimensions on the order of tens of meters, are composed of girders on the order of meters in length. Each individual girder has cross-sectional dimensions of 10-2 to 10-1 meters composed of an iron material with an atomic structure made up primarily of iron, carbon, silicon and manganese ions in a lattice structure on the Angstrom scale (10-10 meters!).

Bone's hierarchy ranges over 9-10 orders of magnitude in length from the molecular level to the whole bone level. At the nanoscale, bone is primarily a two-phase composite material composed of a flexible organic matrix (approximately 90% Type I collagen) which is impregnated with and surrounded by a stiffer, stronger, reinforcing carbonated apatite mineral phase. The combination of strength, stiffness and toughness that are mechanical characteristics of bone as a tissue and structure are initially derived from the intimate interaction between these nanoscale constituents of vastly differing mechanical properties. 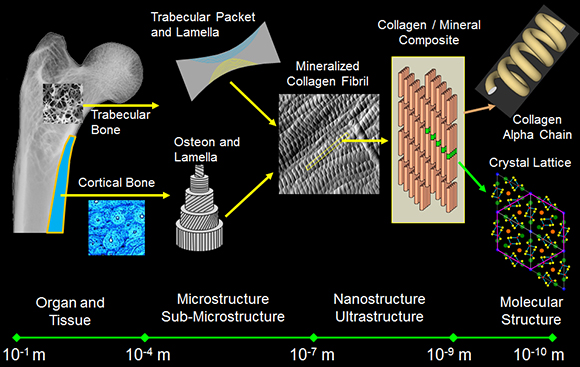 Despite the importance of skeletal health to overall health, it is still not clear how the nanoscale properties of collagen and mineral in bone, and their interaction with one another, produce the mechanical competence that exists at larger length scales. Further, it is not known how perturbations to the individual constituents (such as those that may occur with disease, trauma, nutrition or in response to mechanical stimulation) change bone's mechanical properties. A recent study illustrated how changes to even ancillary components of the bone extracellular matrix (ECM) can drastically alter properties across the bone hierarchy (Thurner et al., Bone 2010: 46(6): 1564-1573). In order to develop relevant treatment options for defects, damage and disease in bone, it is imperative to understand how biological and environmental factors influence bone composition, assembly, and organization throughout the tissue hierarchy, and to directly tie these properties to mechanical function.

The Bone Extracellular Matrix: Inorganic Carbonated Hydroxyapatite
About two-thirds of the weight of bone is a mineral phase often generically described as a form of the naturally occurring mineral hydroxyapatite [Ca10(PO4)6(OH)2]. However, the most thermodynamically stable mineral in bone is a non-stoichiometric, calcium-deficient apatite similar to dahlite. The ions initially form a hexagonal crystal lattice, but as the crystals mature they take on a plate shape, with an average size of 50 nm x 25 nm and an average thickness of about 2-3 nm. In mature bone mineral, calcium is the most predominant ion, but other ionic species such as carbonate can be easily substituted into each space in the crystalline lattice. As ions of different size and charge enter the lattice, distortions and vacancies occur which cause strain in the lattice and change the crystal size and perfection (or crystallinity). These properties along with orientation of the mineral relative to collagen have significant impacts on the mechanical characteristics of bone at larger length scales. However, direct relationships between the physicochemical properties of bone mineral and mechanical integrity have not been firmly established, partially due to the variety of hierarchical levels at which these properties can be characterized. 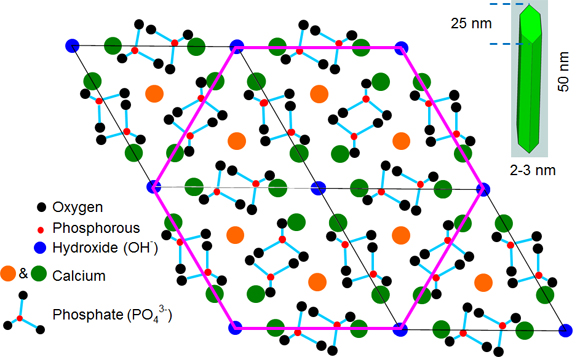 The Bone Extracellular Matrix: Type I Collagen
The remaining one-third of bone by weight is approximately 90% Type I collagen, the most abundant form of the most abundant protein in mammals. It is found throughout the body and forms a major portion of the extracellular matrix of many tissues including bone, dentin, tendon, skin, arterial wall, cornea, fibrocartilage and scar tissue. Type I collagen is a versatile protein that provides the scaffolding for tissue formation and subsequent mineralization in tissues which ultimately mineralize. It is important in mediating cell adhesion and migration. Most notably, it is the principal source of tensile strength in many tissues. Collagen is synthesized as a polypeptide chain of amino acids with an uninterrupted repeating motif of Glycine-X-Y triplets (X and Y are often proline and hydroxyproline, respectively). The significance of glycine being present as every third amino acid is that its small side chain (a single hydrogen atom) can be accommodated within the central axis of a left-handed helical structure (the a chain). Three helical a chains (two a1 and one a2) then counter-wind into a right-handed triple helix. Once the cell which forms collagen secretes this pro-collagen molecule, non-helical pro-collagen ends are enzymatically cleaved resulting in a mature tropocollagen molecule that is 300 nm long and 1.5 nm in diameter. Tropocollagen self-assembles into a staggered, parallel twist to form a 3D fibril (for details on this how the 3D packing occurs, see a recent paper by Orgel et al.). Due to space between the ends of the tropocollagen molecules and an offset from row to row, gap and overlap zones exist within the fibril and produce an oscillating surface topography with a characteristic axial repeat pattern called the D-periodicity. 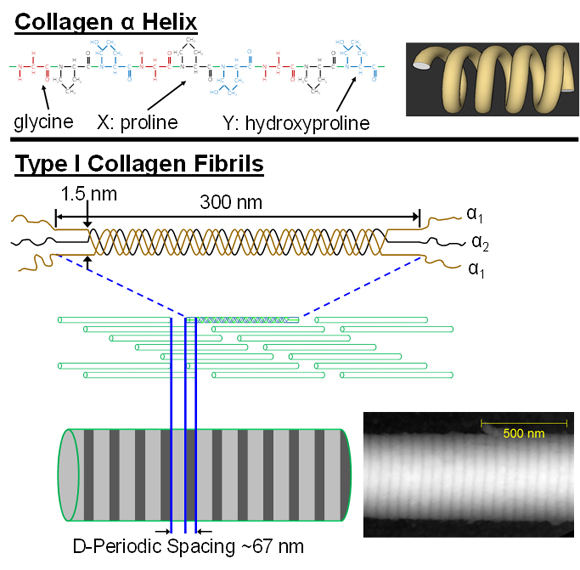 This nanoscale collagen fibril is the primary building block of many collagen-based tissues, including bone as shown above and tendon as demonstrated below. Although several diseases strike collagen-based tissues, there is a crticial gap in our understanding of how nanoscale features of collagen and mineral influence more clinically-relevant tissues ans structural-level mechanical properties. 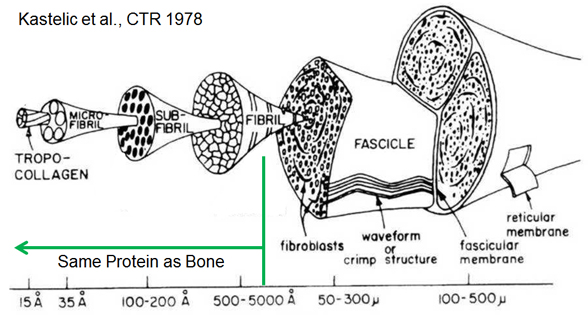